Who don’t know Persona 3? For RPG gamer, it is a must to play game. Like, if you know Final Fantasy, you should know about Shin Megami Tensei series. Persona is the most famous title from Shin Megami Tensei series. Up until now, there are 4 Persona games, with the upcoming Persona 5. Though Persona 3 & 4 have few sequels / ports. Now, I will review the second musical, Gunjou no Meikyuu. Blame me that I watched from the 2nd because I didn’t know how many were there until I watched the ending and felt weird. I searched and found that it was the 2nd stage play. The 1st musical is Ao no Kiseki (Blue Awakening) about how the MC collected his friends, 2nd is Gunjou no Meikyuu (Ultramarine Labyrinth) with the battle of Strega, and the latest from last year is Souen no Kesshou (Bismuth Crystal).

Nah, this poster is supposed for the third musical in 2015. But no changed member.

I only watched the male MC version although there is the female MC, following its portable port. The original game only has male MC. It was because most of the stories were similar, with different fanservice etc. But maybe I will also watch the female version later. Both male & female MC actors are a voice actor/seiyuu with great singing ability. Amada Ken was played by two actors, both for male and female MC. Maybe because he is still a kid so it would be too tiring to perform on both versions. For referrer, please check its wikia. Well, let’s see the character art for SEES member. 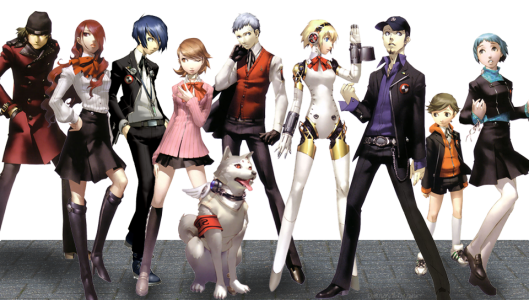 Shouta Aoi (male MC) is famous when he voiced Mikaze Ai in Uta no Prince-sama. Asumi Kana is a very famous voice actress but I mostly don’t watch her anime. I played Guilty Crown Lost X’mas (Carol) and Zettai Meikyuu Grimm (Rapunzel) when she was there. Fujiwara Yuuki is also a seiyuu (Muma in Zettai Meikyuu Grimm & Jack Millers in Eikoku Tantei Mysteria). As for Matsumoto Yuuichi, I knew him when he acted as King in Clock Zero ~Shuuen no Ichibyou~ Re-verse-Mind. Fujita Ray have acted as Viscount Druitt in Kuroshitsuji Musical 2 The Most Beautiful Death in the World.

Shouta was singing Burn My Dread in the opening act. 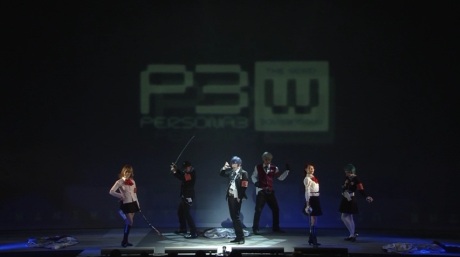 And the rest member took a pose.

Everyone in this musical have great singing ability, except some of Strega member. Sadly, in the second musical, Yukari, Mitsuru, and Junpei didn’t have personal singing performance. But I feel that they are very great, especially Mitsuru’s actor. I love her cool acting. 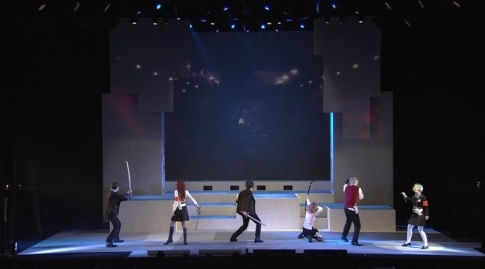 In battle scene, everyone were prepared for battle as in the game. You could tell that Akihiko-senpai was jumping as close enough as the game battle. Of course the enemy is coming on the screen. 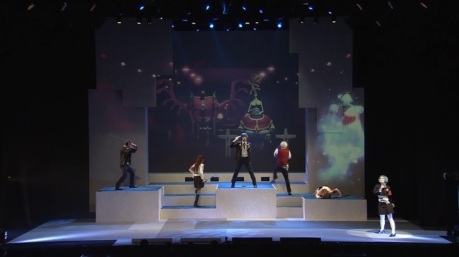 As well as the Persona. It was also from the projector. Maybe they are playing Wii? Sakuya shot his head to call Orpheus out. 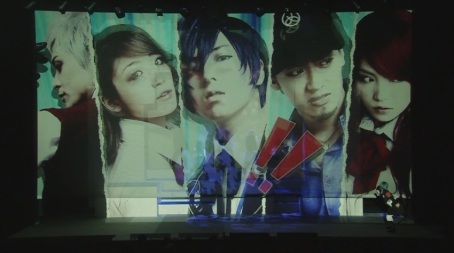 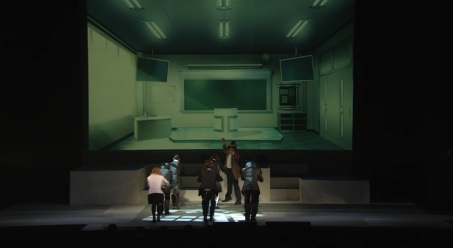 School live. Junpei was always asked by the teacher.

And Sakuya will always help him. One was right and one wrong answer.

Test scene. It’s weird without real table & chair. Haha~~ It was said that Junpei had gave up on his test. 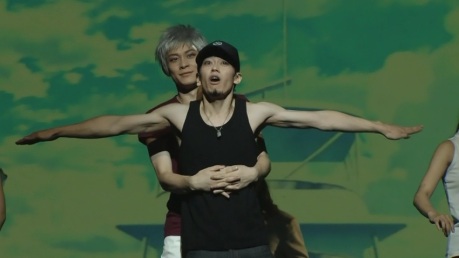 After the test, they had a vacation in Mitsuru’s villa. What were Akihiko and Junpei doing? 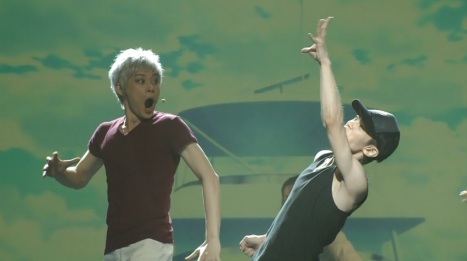 Akihiko released him to talk to Fuuka so they were doing slow motion for Junpei falling to the sea.

Hitting on an older girl with fighting pose. Akihiko’s legs… WHAT THE!? 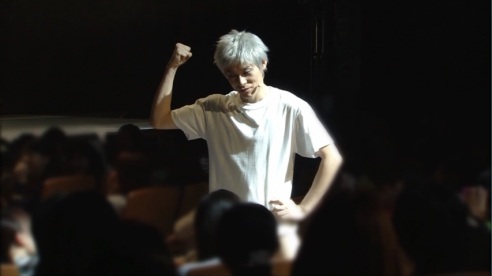 Tried to hit at the female audience.

Then, shocked by obvious rejection. 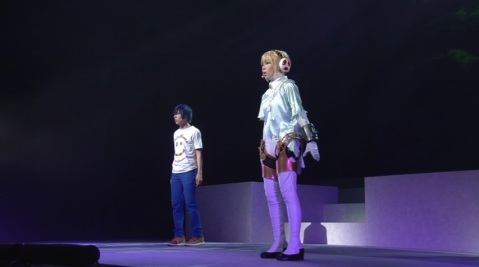 Sakuya & Aegis’ song. Really, Shouta Aoi’s voice looks like a girl’s so it is like watching two girls singing in a duet. Zaq is obviously great at singing and can be compared with Shouta.

The battle with full member. Although not for long since Aragaki will be dead in the future. *Sad, he had the strongest attack.

Pharos (eng) or Fallos (Jap) will have more role in the third musical.

Fuuka caught Aragaki when he was cooking. A strange moment. 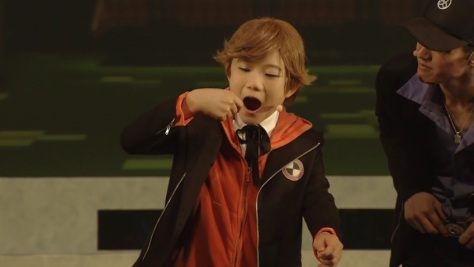 Look? I have mentioned that P3 didn’t use enough utensils in Clock Zero Musical post. Amada seems so stupid to eat the air…. At least Clock Zero prepared real mug and plates. 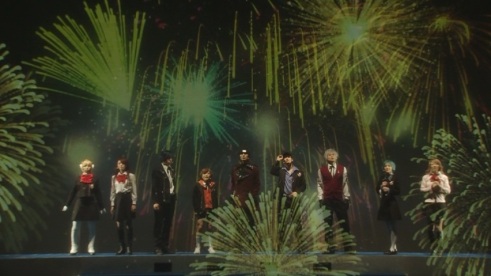 Jin & Takaya last moment. I wonder what happened with Chidori after Junpei brought her to hospital. She was supposed to die in the real game scenario. But Chidori didn’t appear anymore after that. 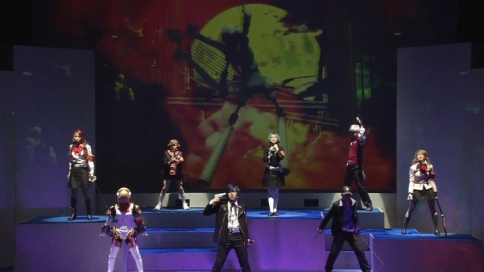 Ending song by Sakuya and female members. His voice can fit girl’s voice and I can’t tell the difference in his high pitch voice. But Shouta is very great! 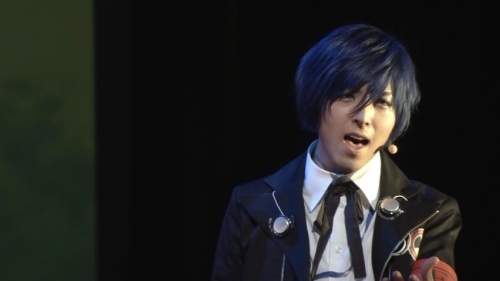 Look at him up close. Beautiful woman? He is a male, though!

Ending curtain. Everyone sang the “Soul Phrase” together.

Matsumoto Yuuichi was the one who gave his thanks to the audience & cast members. He was waving (staring) at Shouta for saying that they had the same haircolor.

FINAL THOUGHTS:
+ Great singing ability from all actors.
+ The actors could match the seiyuu’s voice in game.
+ Cool battle projection, although a bit stupid to see every SEES member face backward. Second screen gives big impact.
+ Have few comedies that won’t be as boring as Kuroshitsuji 2 & 3.
+ Story followed its old scenario.
+ BGM comes from the game so it’s familiar.
+ Interactive question to the audience (made by Akihiko & friends at the beach). That’s funny.
+ Permanent main actors for each series. They have perfect role so I won’t be sad to lose them. Though Fujita Ray’s role is dead so he won’t be in the 3rd musical.
– Doesn’t include enough properties so it is weird.
– Chidori is missing forever?
– Not enough new song. Only character performances used new song.
– Small stage & boring background. Only the screen is changing. Even Clock Zero in the same small stage, used two different backgrounds image that could be replaced by another picture. P3 is depending only on its projector.
– Doesn’t have Koromaru, the dog. That’s not important though.

Nb: I don’t know whether it is in P3WM 1 or 3 that there is an onsen / hotspring scene. The male characters are half nude with only towel!