Takatora is a sarcastic boy. Here, his personality was same, but more active than it used to be in first Asaki (I think). Still had his Toshimitsu sword and wanted to monopolize Saya for himself.

Even though he’s the same sarcastic as in the first game, now, he’s more active. If Rurou called Saya as Akazukin, he called Takatora as Hunter (Ryoushi). He claims Saya as his girlfriend without considering her feelings and everyone who hear it. But always getting yelled by Giou. He has older sister, not older brother here. The first time Saya went out with him then eat crepe, he licked Saya’s cream from her hand even if she remembered that Takatora hate sweet. Another event was he asked Saya to become ayakashi buster together even after they have graduated. Saya thinks it’ll be good to work with him and she agrees. 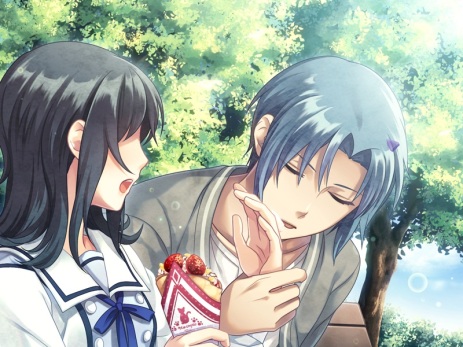 A conversation about Rin makes him asks Saya to go on to beach someday after they’ve done with the work. He wants to choose swimsuit for Saya although it’s very embarrassing. At night, he wanted Saya to comfort him, so she pat Takatora’s head. She thinks his hair was soft but Takatora prefers her hair beautiful hair instead. Later, he saved Saya from Rurou’s second attack but Shuu, who came late, was mad at him (in a joke). Takatora also is a weird person. He claims that he doesn’t have any food he dislike but wants Saya to always eat with him so he can put his hated food for her. And remember the onepiece clothes from Saeko? Saya shows it to him at night and he is happy to see her chest gets revealed.

One day, Mitsuyo-san exchange him and Saya’s uniform on will. When Takatora gave it back in her room, Saya just imagining if Takatora use her uniform with skirt. It’s cute, really, to see his expression. Again, Saya must come back late until night. Some wild dogs are chasing her and thankfully, Takatora helps her to ward it off. As for the last map for Takatora, he asks Saya to do an exorcism pose with love together. And the last thing, she saw a kid presence near waterfall before going home.

Takatora wants to go bathing after Saya, but he must play janken first with the other guys. Finally, whne he’s able to come in the bath, Shuu also comes with him. He even immersing Takatora’s head into the water and count 10 before Takatora’s let his head out. He says he will protect Saya and not care of Shuu’s order. After Takatora agrees with Shuu for Saya’s scent is good, Shuu immerse his head again. Suddenly, Saeko calls Saya to go out and meet her outside Miwa’s house. She knows of her Nie Family and then changes form to a snake woman, named Hida. She also brings Kuira and Rurou along. Thankfully, Takatora quickly arrives to slash Hida with hi Toshimitsu’s sword. But they’re escaping after Takeru and the others came. At night, Saya is dreaming of when Himiko hears that Yaya, her first son will become a king. She thinks it’ll be better if Iyo will be the one because of his strength.

Saya wakes up with Touma’s yell to gather everyone at outside so they can see when Obaba-sama calls the Chinkon no Rokushin Gods. They’re little Tatsuki (CV: Naitou Ami), Mizuchi (CV: Katou Masayuki), cute Tenko (CV: Ogasawara Saki), the sarcastic lady Hayame (CV: Ueda Noriko), beautiful but can turn scary lady Kuguno (CV: Shimo Ayaka), the big man who is able to stop Hayame and Kuguno’s fight, Sai (CV: Karasuma Yuuichi), and the beautifully white God Shinato (CV: Yanai Hitoshi). They’re just talking about the Kija, that it’s not especially evil or what. Shinato also mentions Kuira, whom has given unbalance situation to the barrier. If something happen, that it’ll be up to Takeru and Naohi’s power to save all.

After the conversation with Gods, Takatora asks a date with Saya to town and go karaoke-ing. He asked her to not go anywhere while giving her pair rings and she agreed to it. Too bad they met Rurou on the way back home, which Takatora couldn’t win against at fullmoon (Rurou is a wolf, after all). Rurou wants Saya to be his woman, but she doesn’t want to so he will eat her. He had scratch her chest but Giou and Chinkon no Rokushin then appeared to help them. Of course it’ll make Shuu angry but Giou can stop his anger right away. After Saya has took a bath, Takatora is questioning himself if he, who has the ayakashi blood in Toshimitsu family, is the same as Rurou who love Saya for her blood. Then asking if she love her as a man or not. Saya says she loves him then he kisses her wound as he’s happy to hear that, but won’t eat her, saying that he’s human.

Another encounter with Rurou happens when Saya wants to search for Takatora. He wears a jersey (which not so good except to open his chest), asked to talk alone with Saya. Rurou begins to tell his story, of why he wants Saya’s blood. It is to save his kinds, that was attacked. Although he begs her to apologize for yesterday’s attack and to let him use her blood, Saya can’t believe him and refuse his request. He then asks if she like the weak Takatora, kissing her with sudden attempt, which Saya gives him answer that Takatora isn’t a weak person and there’s no need to answering more. Rurou goes as Saya refusing him, but he says he’ll get her in the future (as his goodbye words) even though he knows her feelings.

Saya returns home with Takatora welcoming her in front of the door. But she fell to his arms as she just had been safe from dangerous Rurou. Takatora makes a promise to protect her while hugging Saya tightly. While the two of them were being lovey-dovey, Hida, who knew Rurou had failed, trying to go on herself. But Yamato will also take care of It himself for the next attack. He goes to Takeru’s house, asking if he can show him the sacred tool to reveal Yamataikoku, with being famous as present. But Takeru is lost and can’t give him answer right away, so Yamato is backing off. Meanwhile, Takatora asked what had happened yesterday night once more. Saya told him the truth of her meeting with Rurou. When Takatora knows of their kiss, he kisses Saya forcefully, makes her heart wavering with embarrassment. He also asks to get marry after they have graduated later.

One night, Saya, Giou, and Takatora makes a team to battle with Rurou. They won for awhile and after that fight, Takatora asks to sleep on Saya’s lap. He says that he might be couldn’t tell if he like her for her blood or as a man, but now, he’s loving her and other won’t matter. At Yamato’s house, he is ready to break the seal to awaken Kija. And it’s to give it a vessel, which is Kuira’s body (Yamato said it’s belongs to him after all). Yamato ordered Kija to kill Mahito’s descendant. But as he had betrayed Kuira’s wish to be loved by him, as Kija, he killed Hida and Yamato, then decided to destroy the world to fulfill Yamato’s wish. Saya and the others could feel the presence of Kija then gathering to talk with Chinkon no Rokushin about it. They must prepare for battle.

Saya and Takatora must fight Rurou again. With sterling silver knife he had, Takatora successfully beat and kill Rurou. He bought it when he buy a ring for Saya previously in town as it is needed to fight a wolf (not vampire?). They’ve won the fight and the scene is changing to Takatora’s graduation day. Saya asks him if he is stil remember the promise. For first, Takatora teases her that he doesn’t know, but then, he says she’ll be his woman. They’re kissing under cherry blossoms.. 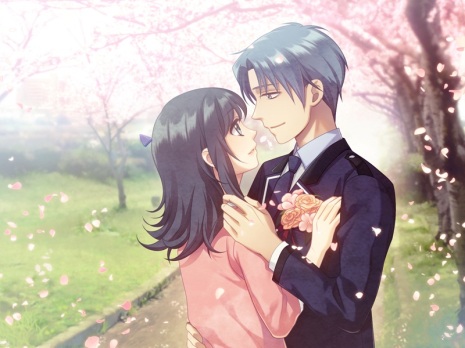 Here, Saya just sees Takatora as her kouhai and makes him surrender. He behaves coldly to Saya now, doesn’t want to talk much with her even after the fight with Rurou. After he killed Rurou in the last battle, Takatora wishes to be an adult soon. He hugs Saya happily, wanted her to wait until the day come for him to be real adult. The next summer, the two of them goes to school together, but not romantically ended up. 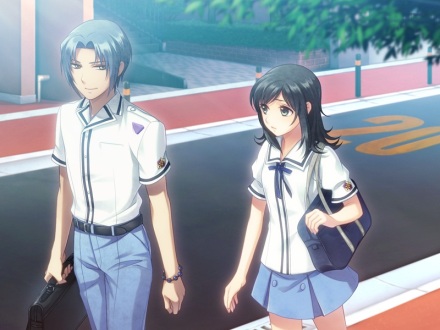 I’m very disappointed for picture quality. Also, Takatora’s story feels so short. I don’t know what’s more to happen with Kija after he killed Yamato and Saeko. Then, while the fighting scene in first Asaki was pretty long, in here, everything seemed quicker. That’s good for some point (didn’t waste my time), but then, it didn’t tell it all. The enemies were also just appeared quiet a few times, not completing their purpose at all. Overall, Takatora’s route was low in my mind. His ending was common and I couldn’t feel how Saya love him in the end. It’s all happened in a flash.

Already ended on November 28th but I wonder whether to play the after ending quests or not. I might write my impression on this game, but not review.