I’m not writing review about the game since many have done it. Another reason is because I’m not a fanatic fan of it. Just bear with my opinion as one that didn’t worship it as much as the other player. Although this isn’t a review, I might add spoiler for my impression and reason. To make it clear, I also had listened to 6 of its drama CDs + 3 Versus CDs.

As you’ve knew, Diabolik Lovers was based on vampire (吸血鬼 kyuuketsuki). There were 6 main guys in this series, Sakamaki Ayato (CV: Midorikawa Hikaru), Sakamaki Kanato (CV: Kaji Yuki), Sakamaki Laito (CV: Hirakawa Daisuke)-are of the same mother, Cordelia. Sakamaki Shuu (CV: Toriumi Kousuke) is the eldest son from their father’s second wife, Beatrix, which also has the same mother as Sakamaki Reiji (CV: Konishi Katsuyuki). The youngest in their family is Sakamaki Subaru (CV: Kondo Takashi), who uses brutal force in every actions and Christa is his mother. As for heroine, the name is Komori Yui. 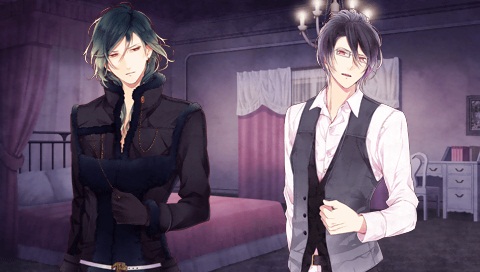 That’s all for character introduction, because I won’t write review for it. For me, the game was just a bunch of short stories (5-10 mins each) and I couldn’t find something interesting as to why I must become fanatic of it. The story isn’t excellent or what, just trying to satisfy girls’ heart (and ears?) with soft or brutal voice of them, while trying to be their lovers. To add an extra, it used dummy mic (I just found out the meaning of dummy mic after Kannou Mukashi Banashi, sorry, I’m very late).

First of all, I’ll write my thoughts on Ayato. The beginning of his story is of course, full of fanservice as he drank Yui’s blood very often. Much of his story is about the trouble Cordelia and her lover, Richter, gives to him because she wants to take Yui’s body. You’ll find that Cordelia was pushed down from balcony by Ayato, then got burnt by Kanato. Though she must be dead, her heart was found in Yui’s body, after she died at young age. Ayato’s bad ending just consists of he killed everyone, including his father, became the head and lived with Yui as she became vampire too. The thing is, vampires can also drink blood of their kind (It’s a  bit weird to me).

After talking about Ayato, I might go to Kanato, before I become sick of high yandere level. It’s not that I dislike yandere, I like it, but not to the extent of shouting all loud until it break my ears. Well, Kanato did that almost all the time. He was nicknamed as “hysteric” by Ayato, suit him very well. Kanato could change from sweet-in rage mode, especially if it’s about his teddy bear doll. Turns out that inside his doll, there is Cordelia’s ash in a bottle he kept all along. Anyway, he was the one who burned Cordelia to death after she fell from balcony. Cordelia just plays with men everyday and didn’t care of her child. She was a daughter from Demon King and had her loyal lover, Richter, younger brother of Kanato’s father. Don’t forget that he likes to keep human as one of his doll, after Cordelia gave him one in the past. That’s freaky and for some reason, I didn’t like him the most after Laito. Though I am surprise by Kaji Yuki’s voice that can change often and I know he’s into it really good. 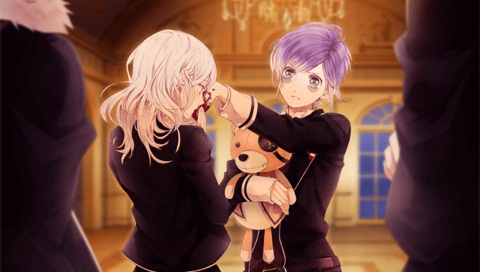 Laito, of course, is a triplet of Ayato and Kanato. He’s pervert and everyone knows that. The same as other, his story is based on Cordelia’s attempt to come back to life. I played him first and sorry, didn’t give me much interesting line to remember, except he’s likely to give Yui to the other brother just for seeing her feels their fang (because he’s a pervert, yes). Not much differences as Ayato’s ending, they’re become couple.

Shuu is the eldest from all. He always sleeps everywhere everytime, puts earphone, and not interested in anything. I found that he’s also the kindest of all, had human friend in his childhood. But Reiji destroyed his dream, burning his friend’s village. When Shuu found his dead friend’s body, he drank of his blood to make sure he remembered it. One of his ending got him fight with Reiji after he found the truth, but they died together, which made the other brothers had Yui for themselves. Such a creepy end. I think Shuu’s story is boring, the same as Laito, though it also shows how kind he is to his friend.

The next is about Reiji, who behaves like their parents/butler?. In Drama CD, I think he’s the most boring character. It’s true that Konishi didn’t use full use on dummy mic, but surprisingly, his story was the best of all for me. It’s because it explained very well on how Cordelia’s heart gotten inside Yui, how she changed Yui to be in her possession for a while, and how much love Reiji had for Yui to not obeying Cordelia’s order numerous times. I like it when Reiji saved Yui from draining herself to river. That shows his passion for her, even though he doesn’t admit it obviously. Sadly, in Shuu’s route, he killed Shuu’s friend and burnt the village. It ruins his image. Nevermind that, I think I love his story the best.

The last guy is Sakamaki Subaru. While I think he’s cute and I like him the best in Diabolik Lovers, I don’t love his story as much as Reiji. Uh, Subaru is cute. More than yandere, I think he’s a tsundere. He bursts out anger with knocking and kicking all things, but deep inside, he loves his mother. Christa is still alive, and many sees him looks alike with her. A few times, Yui calmed him down by behaving like his mother, took care of his wound, etc. He didn’t admit that he fell for her at first, but then, he knew he couldn’t keep it inside his heart anymore. Subaru knows about Cordelia in Yui’s body but keeps it secret until the person herself hears it. Very thoughtful indeed. Kondo’s voice is very good with dummy mic. I think his voice might catch up anyone’s heart even without using it. I really think like that after Persona ~Opera za no Kajin~.

That’s all for my impression. I think it’ll turn to be short review also, and becoming suck at writing pure impression as I mixed it all. Even if I don’t dislike Diabolik Lovers, I also not to be a fan of it. I like listening to its CD and all, but not feeling “キャキャ” towards it. There are many more stories I find more suitable and beautiful than this one, even though not many people taking interest in it. Yeah, that’s why I won’t be into Diabolik Lovers wave (Uh, Korean wave?) nowadays. Plus, there’s no bonus for completion? Too bad.. Next, I’ll try Wajin Ibunroku ~Asaki, Yumemishi~. It’s sad to know there isn’t Chihaya anymore. Mio should create another story or another dimension of Asaki, Yumemishi rather than changing the hero, that’s my opinion.