DRAMAtical Murder is a game by Nitro+ Chiral. To be truth, it’s the first time I ever played Nitro+ game, even more to BL. But surprisingly, I can stand to watch guy-guy relationships in the game (though it won’t change my preference of choosing guy-girl couple more than BL). Beware that I made this short review with spoiler. 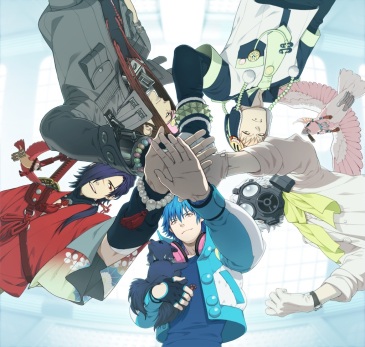 The story centered around Seragaki Aoba (23), the blue-haired boy worked at Heibon (parts store or like that, which have Haga-san as its manager). He has a male All-mate dog (robotic partner for human, can also takes part in the game called Rhyme), Ren, and lives with his grandmother, Tae. A friend of him, Koujaku, is well-known guy in female’s eyes. The other one is Mizuki, known for his success at Rhyme game. For some reason, he met many new friends, such as Noize (this boy is just 19 years old but a genius and self-centered person), Clear (a mysterious gas-masked guy who fell in front of Aoba), and Mink (the mohawk guy?).

The accident happened when Tae got kidnapped by Mizuki and Aoba must saved her with his friends. It was all because of one person, Toue, the man who build Platinum Jail, the city where they lives now. He made Mizuki lose conscious and performing cruel act to kidnap Tae, Toue also conducting research to Aoba’s body. This resulting in Aoba’s power that can destroy the world, wherein as the game continues, it also makes his twin older brother, Sei, lives in misery for his ‘life’ power is needed for Toue’s plan. In the end, Aoba won over Toue at the battle in Over Tower (many wrote Oval but the background wrote it ‘Overr Tower’), but also sacrificing Sei’s life to make it end perfectly. Though in happy ending for other character’s route, Sei’s body came back but the soul was different. Below is the character’s introduction with a small ammount of their storyline (of course with spoiler). 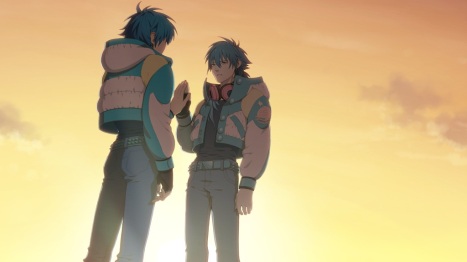 He is the main hero. From Toue’s research, he was born with power of ‘death’. Works at Heibon for the time being, always miscalled as a woman because of his beautiful face. Aoba is a straight person and really cares of his grandma. Has the ability to come in someone’s mind (Scrap), be it to help them or can kill them from inside. 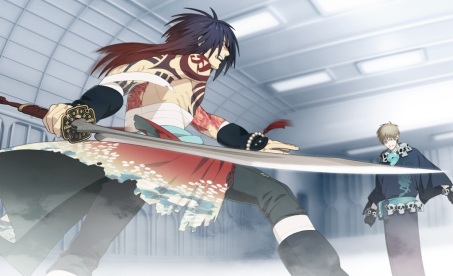 Aoba’s childhood friend and is popular with women. But he choose to stay by Aoba’s side in the end, can’t hold of his feelings for him. He is a calm person, usually, and very good at Japanese sword (katana). Doesn’t want to say his problem to other person and hold it himself until Aoba finds out of his past. Koujaku has a frightful past where a man named Ryuhou gives him tattoo and his family is of a yakuza. He always hated Ryohou all his life. When Koujaku finally found that person, he successfully beaten the guy of his past then go to Over Tower. 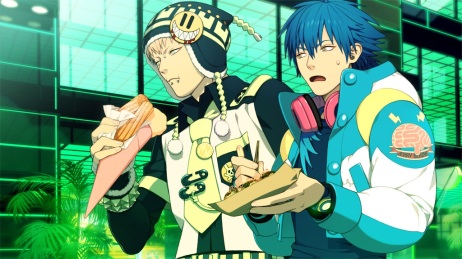 A genius at finding information, but lack humanity (I mean, he always does things as he pleases and doesn’t care for what other think). It’s also because he can’t feel pain that cause his parents to abandoned little Noize. A 19 years old kid who’s good at Rhyme game (because he think he can feel pain there) and choose to live with Aoba after he returned his senses, despite he is a rich one for true.

Uh, I don’t think I have much to tell of him except that he is a strong guy who rides on motorcycle. Mink is the leader of his group and really loves nature. I dislike him for using a chance when Aoba turns weird to ‘feel’ him. 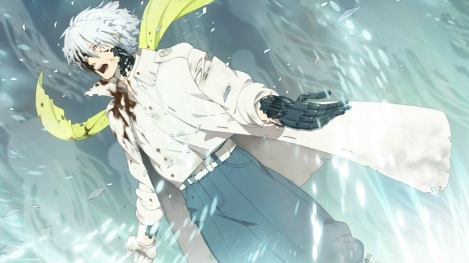 At first, he is just a masked guy and is a weird person. But he claims that his grandpa is the one who told him to use mask because his face is different from normal human. When Aoba saw it for real and said it’s normal, Clear was very happy and learned many things for his ‘master’, such as the beauty of life. The truth is, he is just another research-robot made by Toue and there’re other who looks just like him. Well, he believes in Aoba’s words of protecting their world so with his song, Clear helps Aoba to win over Toue but must die (stop functioning?) from it. His dying scene made me sad.. ‘Kay, he regained life back thanks to Tae. 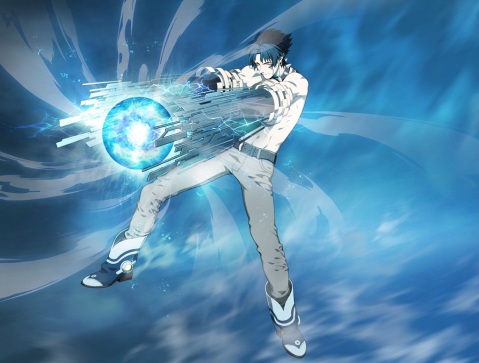 Despite it is a secret route, the real thing is, it’s for Ren! The loyal cute dog All-mate of Aoba who transforms to cool guy in Rhyme’s world. He protects Aoba with his might after 5 years lives with his master. Suddenly, Ren got a bug inside his data and attacked Aoba with many All-mates, but with Aoba’s knowledge of him, he changed back. The reality is, Ren is another self of Aoba. The differences between Ren and ‘destruction’ Aoba is he took dog All-mate form in real life. After Sei had sacrificing his life for Aoba, it’s also a goodbye for Aoba and human-form Ren because it’ll destroy Rhyme. Though in the end, Ren came back in another form as a gift to Aoba.

Here, Virus and Trip (Did I forgot to mention them in the beginning? They’ve known Aoba for long in Platinum Jail) also revealed their true self that they’re a group of Toue’s underling. Also knew Aoba’s real past. In their route (one of bad end), rather than giving Aoba to Toue, they hides Aoba for themselves.

N.B. : Had I mention Suga Noriya is Ozaki Hideo’s seiyuu in Chou no Doku? 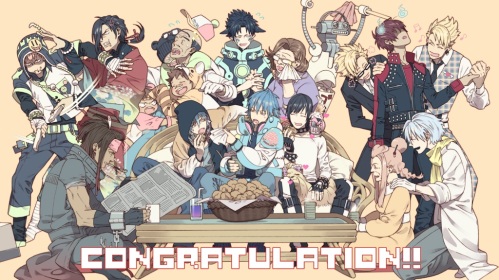 Story: A valid storyline but frightening bad endings. It has good background although its prologue is very long for a VN. But after playing first route, it can be skipped.

Music and Song: BGMs are best! The music really fits its theme and nice style for modernity (techno) in the story. As for song, the appealing ones are just ‘AI CATCH’ and ‘tears’ for me.

Character Design: Uh, Mink’s mohawk style isn’t into my preference but let’s put him aside because his story also feels very short compared to others. It helps me to not look at him longer. Koujaku’s style is unique. While others used modern style clothing, he used classic Japanese style and showing his indepence in fashion (?). Overall, they have personality in their fashion, even though Clear’s clothes isn’t too shiny than others (except the apron one). And each have their own way of telling their stories, which is very good.

Background: No, this won’t work if I just say it here. The background is beautiful, especially loves the night sky in there. You can see here for example: 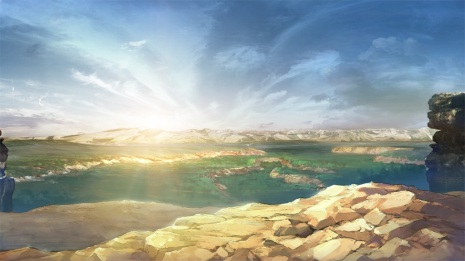 Motion Graphic: Awesome! This would look like watching anime than playing a VN because the battle was moving.. Should see it yourself when Ren used his power, although not all moved smoothly as anime.

Seiyuu: Nitro+ Chiral chose the best of all! I wouldn’t say I like Hino Satoshi’s voice in other game, but here, he sounded manly than usual (maybe also, thanks to the sound recording equipment). I didn’t know most of their voices before (although some are quite known in my head), but I felt grateful for their voices. Especially Atsushi Kisaichi (isn’t it?) that voicing Aoba. Couldn’t have him better. I can’t find Sei’s seiyuu, but it’s similar to Miyata Kouki in my ears.

Overall: Story is valid. The prologue is very long, but it’ll feel short after playing 2 first characters (the orders are Koujaku-Noize-Mink-Clear-Other). I like how Clear made up his mind that the world Aoba had taught him was very important. That’s why I like his character’s development, although for design, I like Ren in Rhyme’s world. 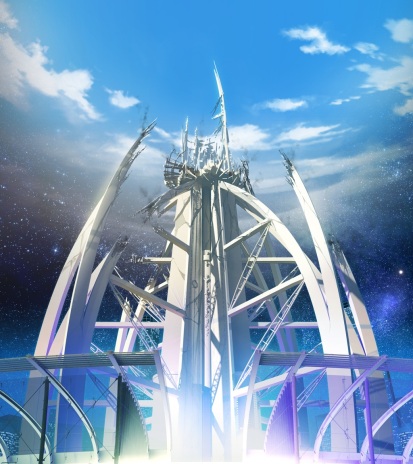 I decided not to write long review for most games because I’m busy now. And might not be able to write about every game I’ve played. But I’ll make sure to post something every month. Abunai Koi no Sousashitsu was dropped because it’s not too good for me. Now that I have been busy with work, I won’t be able to finish all games completely, even more to something not too appealing in my head. But I hope I can stay here (WP) whenever I want. Because gaming is my life! I’m sorry I didn’t write Mink’s route properly because I was sleepy at his story (also because of my busy schedule everyday and just had a little chance of playing every 1 hour per day). Let’s wait for the fandisk to come in 2013. Now that DMMd already done, I wish to play Guilty Crown Lost X’mas (Is it true that Scrooge & Carol are husband-wife? I hope I’ll see the truth)..

I have a playing block right now. In the middle of new Nakaba’s route before the last King though.