This end of month in year 2011, I could just finish Senjou no Valkyria 3 Extra Edition’s storyline and Zettai Meikyuu Grimm ~Nanatsu no Kagi to Rakuen no Otome~ Director’s Cut. I’ll post about VC3’s picture later after completing character’s story. Now, ZMG comes first. That title I made is really fit for this season, but I also think it from If Scenario.

First thing, I would like to describe about this game again. Henrietta Grimm, the heroine, lived with her 3 non-related-by-blood brothers (Jacob Grimm, Willhelm Grimm, and Ludwig Grimm).  One time, she met a Dream Demon, Muma, who made her sleep  for years. When she woke up, she found that she and Ludwig already alone in her village. The two nonrelated blood siblings commited their goal to find their brothers, while taking on journey and search for seven keys. The rest is, you can find my older post about each character’s plot.

In this route, Henrietta and her friends finds Willhelm on the way. Then, the road is open to where Jacob is, at the Captain Skull’s ship (that he claims is his subordinate now). At a sudden chance, Jacob takes The Grimm brothers and Henrietta to his mansion (or castle) in a lone island, while he also reveals there’s demon in his body, Vodan (I prefer the Japanese spelling). Also, Vodan make Ludwig’s body turn adult (YAY for adult Ludwig!). Arriving at his castle, Vodan promised to make them out of the island if one of them can take the maiden’s (Henrietta) heart. It is a gamble between each of the guys there to make Henrietta falling over them. 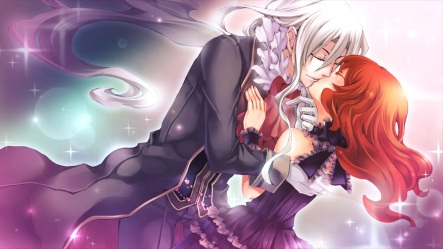 There’s nothing interesting other than he hold a dance party for the demons. Henrietta choose to stay with Jacob for the party. But when she is alone, one of Vodan’s subordinate tries to kill Henrietta because he hates human (also, hate if his master, Vodan, care for a human). Unfortunately, Jacob comes first to rescue her, continues with Willhelm and Ludwig. While trying to punish the demon, Henrietta and Jacob reveals their feelings for each other and Vodan approved their hearts. Vodan ask Captain Skull to bring his ship and let them go to their village. But Jacob takes time to dance a while with Henrietta and they’re kissing. I’m happy Jacob have this story… 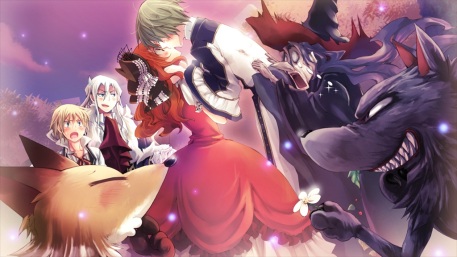 It’s funny to see his reaction while blushing. Because Henrietta breaks his glasses, Willhelm can’t see his way and he ask Henrietta to show him the path. That leads to a scene where he takes shower and when he ask Henrietta to leave, she is making a hard thinking if it’s okay to see Willhelm while changing clothes. But other way, she doesn’t have a chance. Of course that way, she feels her heart beat faster while looking at Willhelm. When she and Willhelm tries to reveal their feelings at beach, Ludwig throws rock to him. They ran away to the castle, but Jacob ask the Witch, Here, to intefere with their moments. Being mad at his brothers, Willhelm took a sudden action and kissed Henrietta in front of many people (Witch Here is already surrender, crying out her youthful). 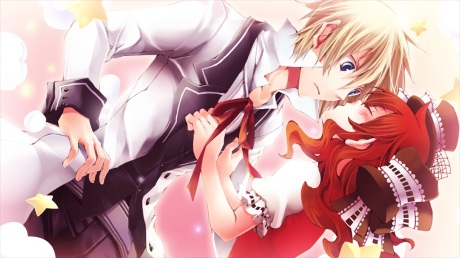 While I was having fun at Willhelm’s story, in this, I was laughing so much to see Ludwig’s reaction.

Ludwig is the youngest of Grimm Brothers and always fighting mouth with Henrietta because of their age’s closeness. After Vodan declares the game, he is practicing to confess alone. But Henrietta heard all of his confession to take her on date under moonlight. Henrietta teases him a bit, but Ludwig denies that confession.  They came to the beach and playing (splashing) water to each other. First, because Ludwig realizes he is in adult form, he doesn’t want to play. But he can’t keep hearing Henrietta teases him and makes action. After that, they can feel the romantic vibes. Before going to bed, Henrietta choose to call Ludwig and say her feelings to be with him. But Ludwig finds a presence and is asking her to run away. It’s true. Jacob and Willhelm are searching for their younger siblings, but Ludwig is faster than them. At sudden chance, Henrietta confessing her feelings and kissing him (quick), make Ludwig blushing all the way. But he sense danger nearing, then brings her to a safe place. He kissed Henrietta behind the bushes and under the fireworks. They’re laughing and kissing again.

This scenario is like a different dimension of usual storyline and just have Henrietta, Ludwig, and Hameln as the characters. Though their names here is changed to Orie, Ryuusuke, and Hameln (uh, he doesn’t change his name..). It’s like an ancient story in Japan, but I can’t remember the title.

Orie and Ryuusuke are two poor human lives in a mountain. It’s winter now and they came to wood. They found a strange person similar to a black stork’s (or goose? Sorry, I really forgot about the legend). He is hurted so Henrietta tries to clean the wound.

The weather becomes worsen and comes a snowstorm. A person knocking their door to find shelter. These kind human let him in and stay until calm. That person tells his name as Hameln, a traveler, who always changing places. To return Orie and Ryuusuke’s kindness, he used the looms in their house as a memento from Ryuusuke’s brothers, who had left the village. He stayed at the room without eating or going out for 3 days, making Orie worried. But when he done with it, Hameln made a beautiful cloth to sell for them.

On another day, Hameln ask Orie to promised not to open the door again. But it have been a week and Orie really is worried. She and Ryuusuke open the door and see Hameln sewing cloth with his true appearance, similar to the one they found at wood. They knew he wasn’t human, so Hameln must go quickly from their eyes. He doesn’t angry because he knows Orie is that kind of person. But at another time, Orie and Ryuusuke found a gift from Hameln, gloves for them to stay warm during winter.

That’s it for its extras. Although there are also many other extras in it, I don’t think I can write anymore because of my split minds. I must think of my thesis too. It’s really troublesome, but it’s needed.

I really suggest to play (or, again) the PC version because of many new stories, CGs, new musics, and there’s character’s songs at each of their showing scene. I’m very satisfied re-playing this title again. Bad ending have CG now, different with PSP version. The only thing annoyed me is.. There’s CAGE VERSION STORYLINE in HERE!!! In Vodan’s story, he took Henrietta in cage forever, killing all of her friends, calling her as Brunhilde. The weird thing is, Henrietta is fine with that.. Oh, come on, where did your spirit to save the world and Jacob go from all this time? I really hate cage story after Amnesia. I don’t think I will like that kind of torture. At least in Grimm, it didn’t happen in main characters’ route….

Okay, last but not least, after Muma, I want HIM & HIM’s ROUTE!!! (Earl Demon for his coolest attitude & Hansel for his cooking skill, that won’t happen)

Two Sides of a Coin, no?