He looks like a bad person (maybe his clothes?), but actually pretty kind. He gives Tiana medicine, let her sleep in his house, bring her to a restaurant, etc. (I’m too lazy to write many more). The thing Tiana did when he got injured after beating up people in front of Restaurant Solitude, really surprised him and thinking differently of Tiana (Actually, she just blowing his wound and says to go). Well, one can’t judge from appearance, right?

He had gave Tiana an apple from the farm. In exchange, Tiana gave him her mousse she had made. It makes him happy, feels familiar with the taste. There’s a scene when Tiana tries to wake him up in the morning, she seems to seeing Ookami’s something (What? Tries to imagine it!)… What’s more of his kindness? He tells her to come back home because maybe Tiana’s father is worried. But when Tiana returns to her house for sure, she feels she’s leaving behind, like she’s already died. It makes her sad, so she runs back to the wood, thinking it’s better to die. When she met Ookami again in the wood, he told her “おかえり”. What a cute thing he had said to the homeless Tiana!

Ookami even brings her to a happy picnic with Yamaneko, Kitsune, Usagi, and dwarfs. When Tiana is scared of her dream, he lets her go to sleep in his room. After she tells her dream, about Ookami’s hands are covered with blood, he tells that it’s fine, as long as it’s not Tiana’s hands. Then they’re sleeping together after the hot-kissing scene as Tiana asks him to do it （*´▽｀*）. 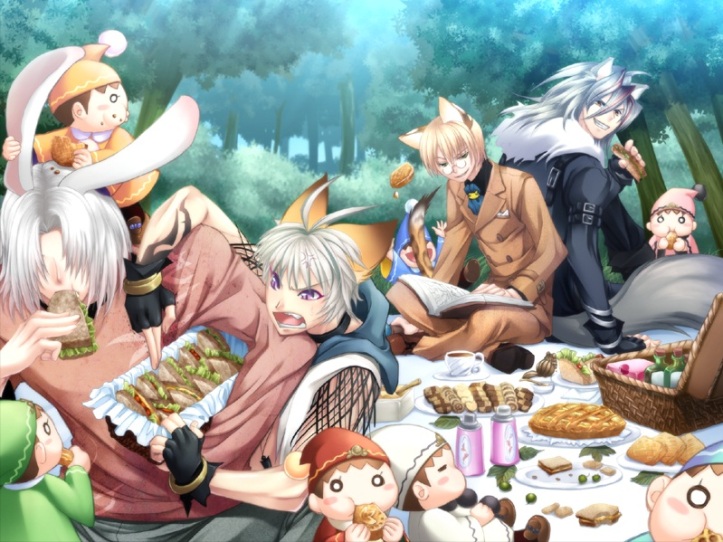 Coming to Restaurant Solitude just brings Tiana to jealous mode. She meets Mejiro-san, a woman  who says Ookami doesn’t want to lay a finger on her because she’s stills a child. More of it, Yamaneko agreed with her. But surprisingly, after they had dinner, Ookami told that she’s now more like a woman. Because of it, it’s near the time to eat her…  It makes Tiana so worried since she will be eaten by Ookami soon. When she told it to Usagi, he asked if it’s true sinced he never had saw Ookami eating human before. What makes me go *tired* over nothing is, Usagi suggested they must become a lover, so Ookami won’t eat her (What! It’s an easy matter, if Tiana have thinking about it right from the start).

When she asks Ookami if she can live in his house without getting eaten, it’s make him taking the bad side. He wants Tiana to be his toy (Gah! I can’t stand it). He begins with ordering Tiana to take off her clothes (So, I won’t write much about it from here. I can’t…). He doesn’t feel satisfied of her, so he goes outside the house, tells that Tiana isn’t the only woman (I began wondering what kind of ending will I get?). Tiana asks Usagi what kind of reason if he do “that” but never kiss her? Maybe it’s because Ookami is afraid to love her..

As she is sad of her feelings towards Ookami, Tiana asks him to kiss her. It makes Ookami refusing her again, that the first time he did the kiss just doesn’t make sense or anything to him. What makes Tiana cries so much is when she tells Ookami that she like him, he won’t consider it. Ookami tells her to leave in the morning if she really likes him. So, she is going out at night and meets Yamaneko, then lives at Restaurant Solitude.

Yamaneko begins attacking her after their conversation. Fortunately, Ookami comes in faster and brings her outside (Yamaneko didn’t have interest in her again after knowing Tiana’s status!). In the wood, Ookami really is angry with her ‘cause she goes at night, where there are many danger lurking around in that wood. Right after that, the two begins confessing their feelings and kissing under the moon.

Ookami said himself that he had killed human before to protect the wood. Whatever the reason for killing, he already did that. But Tiana didn’t think much about it, and she just loved him. Haaaa…, this time, I must look at “that” again.         (*   ε   *!!!)

They had a picnic together, Ookami was taking a nap and Tiana sewed a muffler for him. She wished it will be forever like that. Tiana tried to pick an apple from the tree, and Ookami carried her to reach it. It’s when some picture of her and the brother gets in Tiana’s mind, with the same thing they do. With it, she called Ookami with the same words for that person, “Onisan”. Ookami didn’t seem to understand it. But when they got home, Tiana said Ookami had proposed to her before, it made him said it’s a long time ago, when Tiana was still 5 or 6 years. It’s strange, I know.

To buy something, Tiana came into the restaurant again, meeting Yamaneko. He said Ookami still had some secret she didn’t know yet. When she’s on the way home in a rainy day, she met the dwarfs again (Waaai!! I’m still think they’re really cute!). Because of that, she knew that Ookami didn’t kill human (They proved it because they saw it). Maybe he did that to take someone’s blame.

That night, Tiana had dream about she killed someone and bathed with blood. Ookami tried to calm her, saying it’s just only dream. She couldn’t calm herself though, and kept seeing a red moon.

Some day, she heard Ookami and Usagi’s conversation. It’s about her, for real. Ookami is saying something that mention her past, Usagi added it with, if Tiana knows that she stabbed her own mother must make her sad. She keeps hiding that conversation, ‘til she fell unconscious and tells Ookami about what she knows. To makes Tiana more sad, Ookami is ordering her to live in Usagi’s house from now, separated from himself, because he thinks live with him will make her see bad dreams. Feels abandon like that, Tiana leaves alone.

She went to her house, meets her step-mother, who’s surprised. Her mother asks about the uncle, Gerard. Tiana lies that he’s fine (deep in her heart, she knows that her mother is lying about the question). Tiana keeps begging to her step-mother, to tells the story of her, killed her real mother (If she tells that, Tiana will go forever from her sight).

Long ago, Tiana met and befriended Ookami. Some tragedy happened, where the people in that village chasing Tiana’s mother. Tiana, her mother, and Ookami went to the wood. It’s the place where she stabbed her mother? What’s more to shock? Tiana’s mother is a witch (a bad one, they think), so people are afraid if Tiana has same power and wants to catch them. After all of the past stories, Tiana is scared, running away to the wood, when there’s storm. Ookami catches her again though.

The two of them are sitting near the fireplace, keeps talking about their feelings.

Ookami  keeps taking the blame that he’s the one who killed Tiana’s mother. Well, because the two of them already in love, that isn’t a matter anymore. They lived happily in the end, where Ookami hugged her from behind, and Tiana sewing him a muffler (again). He asked to be married in winter, which surprised Tiana so much. Ookami also whispering his real name to her. 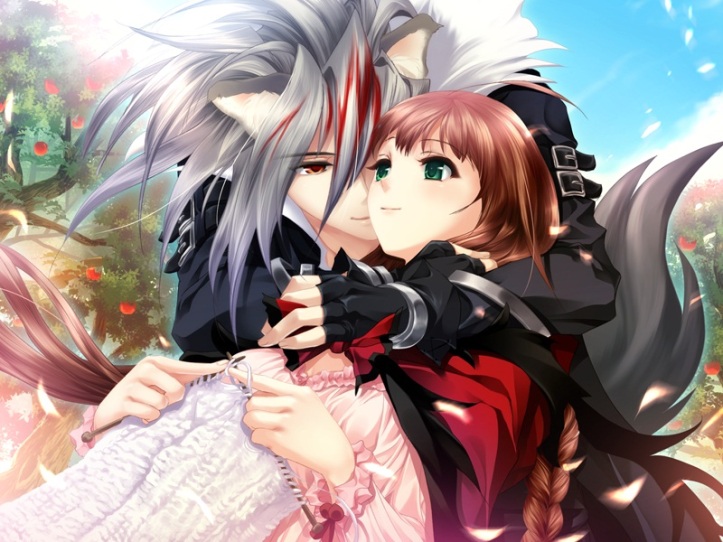 No, it’s not just one ending from this route. Tiana meets Yamaneko in the wood, begins telling bad things about Ookami again. This time, he also says Ookami likes both her mother and Tiana herself. She didn’t believe it, but Yamaneko kept bothering her.

Tiana went straight to Ookami’s room, found a red dress named “Claudia” (her mother’s name). She asks Ookami about that, and he agrees. He has been interested in Tiana’s mother because she’s a witch, beautiful with her power. Tiana believes him and solved one problem.

When Tiana goes in the wood, meeting 7 dwarfs, she asks about the thing happened when Ookami fights the witch. The things is, the witch kills herself with her thunder magic. Ookami keeps blaming himself so Tiana won’t get worried (because she stabbed her mother, right?). And then the witch’s power becomes an apple tree (or so I think), her mother is being kept under it.

She goes to the tree. There, Ookami has waiting for her, telling the truth that he always thinking of her from that time. Tiana hugged him from behind, crying for happiness. In her heart, she prays for her mother to always protect Ookami. Later, she meets Yamaneko.

That lying cat told her that she shouldn’t believe of all he had said. But, it’s true he knows Tiana’s mother. Yamaneko thinks that Tiana’s mother is his absolute existence and planning to revive her. Ookami had a very important role to the wood so Yamaneko could not kill him. Yamaneko wants Tiana to give Ookami’s real name for the plan.

It turns to sudden change. Yamaneko won’t wait anymore, he reveals  his true intention. Fortunately, Ookami’s coming too. It’s near Claudia’s revival, and he wants to get revenge. So, Yamaneko keeps the curse exist in the wood (And, what? He’s the one who likes Tiana’s mother..), brings human into flower to revive Claudia. Yamaneko tells Ookami to quickly gives his name, if not, he will hurts Tiana. Being tortured by Yamaneko, she uses her knife to stabbed herself. Then, she said Yamaneko’s real name. He turns to the flower and nothing happened (This means, Claudia cannot be revive.)…

Everything is going back to normal. Usagi has become the chief of Restaurant Solitude. In winter, Tiana and Ookami hold their wedding. Sitting on a bench in the wood with white clothes, makes it looks more like a fairytale.

Ookami’s real name is shown in this picture (Warning! SPOILER from his data):

As for bad end, some are getting a few changes in the story. The first bad ending I got was about Tiana, Ookami, and Kitsune together (I don’t have to explain it). The second, is about Ookami, telling his name in that flower field. He turns to flower, and Yamaneko is happy because it’s nearly Claudia’s revival. But it didn’t happen. The mad Yamaneko killed Tiana too. The last bad ending appeared after Tiana asked about her mother from the step-mother. She went out to the field after hearing the story. Some voice said to eat the apple to create her own place (the apple’s color becomes golden now). After she eats the apple, she feels so powerful. Ookami said that Tiana’s doing the same as her mother, so he killed her. But he can’t be with her because if Ookami dies, so is the wood.

The apple becomes golden in color

I’ll prefer to play Kitsune’s route first after this ’cause some of his stories are already seen in one of Ookami’s bad scenario.

Ookami maybe is kind, especially since he already befriend Tiana from childhood. But a few stories about him letting Tiana go, is somewhat makes me angry. Why can’t he be more firm with his own feelings? He loves Tiana, but let it go, even tries to give her to Usagi. And Ookami uses bad atittude towards Tiana makes me can’t understand his way of love. But it was solved in happy ending route. They become the real couple and live happily, nothing can make Ookami more kind that to always protect his lover. I can’t stand the Ookami-Tiana-Kitsune’s bad ending though!

Already ended on November 28th but I wonder whether to play the after ending quests or not. I might write my impression on this game, but not review.