Do you ever consider that my post’s title always look like a story’s title? Yeah, I don’t like simple title who uses the one being tells about to be my own post’s title. So that’s why I always add my own words with some clue about what I writes.

I had played 4 characters in Nise no Chigiri now (Akatsuki, Shuuya, Suien, Yamamoto Kansuke). I’m about to finish Masato.
Ok, about the best ending of the four, I think it’s Yamamoto Kansuke’s. He had the best ending and the best feelings for almost of the fact. The happy ending told about him being lived to the same era of Mana’s. Yeah! He lived for about 600+450 years…!!! Quite a long journey… Ehh.., the bad ending always had death within. Yamamoto Kansuke has different side from the other characters. It tells about him being a traitor for Shingen’s side and helps Mana in Masatora’s side. The conflict looks interesting in his side because he’s just using his brain, not his body for helping Masatora’s side. It’s different from the others who uses battle to win against Kansuke’s fighters. The war between Masatora and Shingen looks more real and impressing than other’s route (although Suien’s route was quite liked this, I had played Kansuke’s first).

I’m still lack 1 CG for Akatsuki and I think it link for his life in Mana’s real world. I must completed Tougi Kanehisa’s first to obtain it…right?

Well, about Suien… nothing new about his route except that he betrayed Masatora to met his young sister, Tsukino, who actually had died. But he came back after knew the truth.
Overall, I think it’s hard for me to play Kanehisa’s and Yatarou’s. I don’t like the 2s.
I hope I can complete it all….

I want Clock Zero!!! Really, I want it on PSP! I hope next year…Yeah, next year, maybe…
That’s the way about it. My exam’ll come around 2 weeks later… Such a disaster! 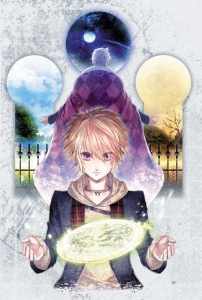